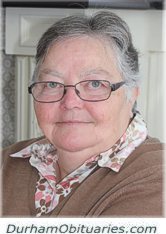 She was born on May 2nd 1951 to the late Thomas and Shirley Short.

She was a proud Nanna of Mika, Martina, Tehya, Mason and Aliyah.

Cherished Aunt and Great-Aunt of her brother’s and her husband’s sibling’s children and grandchildren.

She will be dearly missed by all her Nieces and Nephews.

Debbie was a homemaker and wonderful Mother. Her family gives everyone who cared for Debbie the greatest and warmest gratitude.

A graveside service will be held at Resurrection Catholic Cemetery on Saturday, September 29th 2018 at 11am followed by a reception held at Fernhill Community Centre, 144 Fernhill Boulevard, Oshawa beginning at 12pm.

If desired, donations in Debbie’s memory may be made to Diabetes Canada.