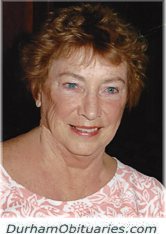 Predeceased by her husband Leslie.

She is survived by her 5 children: daughter Susan and her husband Gary of Erin, son John and his wife Betty of Oshawa, son Leslie Jr. and his wife Mary Pat of Peterborough, son Chris and his wife Joanne of Ottawa and son Brian and his wife Stacey from Whitby.

A life-long resident of Whitby, Joan served on the school board for a number of years and worked at Anderson Collegiate until her retirement in 1994.

Visitation will be held at  W.C. TOWN FUNERAL CHAPEL, 110 Dundas Street East, Whitby on Monday, November 12th 2018 from 2 – 4pm followed immediately thereafter by a funeral service in the funeral home chapel at 4pm.

In lieu of flowers, memorial donations may be made to the Alzheimer’s Society or the charity of you choice.