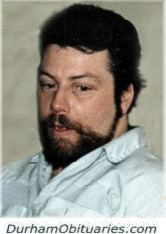 Predeceased by his brother Wayne.

He will be deeply missed by extended family and friends.

Visitation will be held at the OSHAWA FUNERAL HOME, 847 King Street West on Tuesday, November 27th from 2:00 p.m. until time of Funeral Service in the Chapel at 3:00 p.m.

Memorial donations to the Diabetes Association would be appreciated.