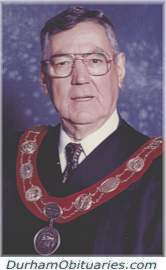 Former Mayor of Whitby, passed away peacefully, surrounded by his loving family on December 3, 2018 at the Village of Taunton Mills.

Tom was a true leader his entire life, serving his community and his country.

He was a World War 2 Veteran and former Light Heavyweight Boxing Champion of Northwest England.

He served for more than 40 years in municipal politics finally ascending to the Mayor’s chair in 1991.

Tom was a labour leader and social activist, attending the founding meeting of the Ontario New Democratic Party and running as candidate for the C.C.F. and N.D.P. on four occasions.

Many will also remember his wonderful baritone singing voice, through his frequent performances throughout the years.

Donations in memory of Tom may be sent to Sick Kids, Operation Smile or the charity of your choice.

Online condolences may be left at  wctownfuneralchapel.com.