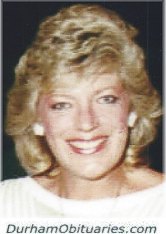 It is with great sadness that the family of Diane Grundy announce her passing on September 6, 2019 in her 77th year, after a courageous battle with her health over the past five months.

Diane will be sadly missed by her brother David Winn and his wife Dorothy, who always looked out for her and with whom she had some great adventures.

Close cousin of Paul (Jane) Gadd, Michael (Cathy) Gadd and Jennifer Gadd, as well as many other cousins in England and Australia. Step sister to Jill (John) Backhouse and Howard (Linda) Eames, also of England.

Diane was born in Hampton, England, and settled in Canada in 1957 after living with her family for three years in Australia when she was younger. An independent woman, Diane loved to travel and created a life for herself in Toronto in the early 60’s.

For over 30 years, she took great pride in working as personal secretary to the Odette brothers and their families who were the founders of Eastern Construction in Toronto.

After retirement Diane moved to Port Perry to be near to her mother and stepfather. She loved the friendly atmosphere and made many new friends, especially the ladies from the Friday night card group in her apartment building.

Diane loved spending time with her family at her brother’s house in Whitby sitting in the garden by the pool with the family dogs.

She will be fondly remembered by her best friends, Helen, Gale, Will, Marina and Josie as well as family for always having a smile on her face and kindness in her heart.

Cremation has taken place and a service will be held at  W.C. TOWN FUNERAL CHAPEL on Monday, September 23, at 12 noon. Visitation 1 hour prior. Reception to follow.

In lieu of flowers, donations to the Canadian Cancer Society, Heart and Stroke Foundation, your local SPCA or animal shelter would be appreciated.

The family would like to thank Dr. Mercer, all the doctors and nurses at Lakeridge Health, Port Perry as well as Toronto Western Hospital, Central East LHIN, and the Palliative Care unit at Lakeridge Health, Oshawa, for the care and kindness shown to Diane during her illness.