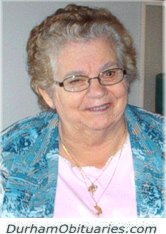 WILLETTS, Mabel “wee Baxter” - Passed away peacefully on November 4, 2019 at Lakeridge Health Oshawa with her loving family by her side.

Beloved wife of Richard Willetts for over 65 years.

Mabel will also be dearly missed by “daughter” Kim (Michael) as well as by many grandchildren and great-grandchildren.

Mabel will be forever remembered for her unconditional love (especially for babies, but people in general), for her nurturing ways and for her tenacity.

Visitation will take place at THORNTON CEMETERY and  FUNERAL CENTRE, 1200 Thornton Road North, Oshawa, (South of Taunton Road and off of Dryden Blvd, 905-579-6787) on Monday, November 11th from 1 pm until time of Funeral Service at 2 pm. Interment will follow.

Expressions of condolence may be left at etouch.ca

“May the winds of heaven blow softly and whisper in your ear
How much we love and miss you and wish that you were here.”