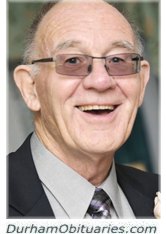 Peacefully with family and friends at his side at the age of 80 following a courageous battle with cancer, David began his final journey.

Born and educated in Manchester, England, David emigrated to Canada in June 1967 and began his long career with Ontario Hydro.

He worked at Lakeview and the following nuclear plants: Pickering, Bruce, Wolsong-South Korea and Darlington as a professional engineer.

He loved his family and their trips camping, watching hockey, and enjoyed curling, golfing and skiing.

Important to him was his Manchester United team and his Thursday pub night buddies.

David is survived by his wife Effie (Elvera) of 47 years, daughter Natasha, her husband Andrew and their daughter Isabelle and son Jason his wife Julie and their children Colton and Averie.

He is survived by his cousin Michael in England.

Our sincere thanks to the wonderful doctors and nursing staff from the Durham Region Cancer Centre for their care and concern.

In lieu of flowers, donations can be made to the SickKids Hospital Foundation in Toronto or the  CHARITY of your choice.