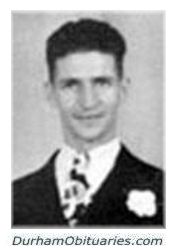 It is with great sadness that the family announces the peaceful passing of Orval Henry Ellis at his residence on Monday, December 16th, 2019.

Orval Henry Ellis was the husband of Unice Madeline Conner in his 99th year.

He will be greatly missed by his many nieces, nephews, a grandniece, a grandnephew, extended family and friends.  He will also be sadly missed by Wayne's dog Lucky.

The family would like to thank the Staff at Souls, Medigas, LHIN, Community Care Durham, VHA, nurses and doctors for their excellent care and support, Veterans, Legion, and a thank you to Pastor Horton and the musicians of (Community Baptist Church).

Thank you also to the staff at Oshawa Funeral Home for all their care.

Funeral Service will be held in the Chapel on Monday, December 30th at 1:00 p.m., with Pastor Horton officiating.

Interment to follow at Mount Lawn Cemetery, in Whitby.

Memorial contributions to Community Baptist Church or a CHARITY of your choice would be appreciated.