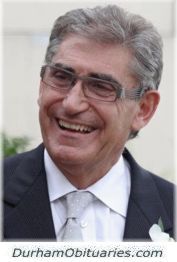 CASTALDO, Antonio  - Passed away on December 16th, 2019 after a courageous fight against Corticobasal Degeneration (CBD).

Tony was the dedicated founder and owner of A&C Travel for over 30 years.

He played a major leadership role in the growth of the Oshawa Little Theatre where he met the love of his life, his wife Christine of 44 years.

He was a devoted father to Thomas (Jenn), Michael (Amy), and Maria (Ian) and a cherished Nonno to Declan, Liam, Nolan, Kieran, Caileigh, Victoria and the little one arriving soon.

Tony is predeceased by his parents Domenico and Maria Castaldo.

He was the adored baby brother to his sisters Antonella, Domenica and Rosa.

Tony was regarded as a loyal friend who welcomed many and embraced them as his brother, sister, son or daughter.

In lieu of flowers, memorial donations can be made to Parkinson Canada: https://donate.parkinson.ca/site/Donation2?df_id=4681&4681.donation=form1&mfc_pref=T Or the Oshawa Little Theatre Renovation Fund at: https://www.oshawalittletheatre.com/donate or (905) 723-0282.