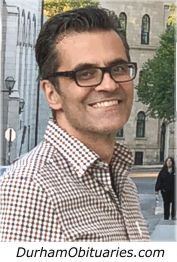 It is with great love and sadness that we announce the passing of Tony Tzouhas.  After a brief but courageous battle with cancer, surrounded by his “tribe,” he found the peace he was looking for in his 57th year.

He loved and was loved by his many cousins, aunts and uncles, in Canada and in Greece, as well as his God-children Mitchel and Seth, not to mention his family of friends, all of whom will miss him in their own significant way.

He picked up a guitar at an early age and continued playing his entire life.  His love of music led him to a career with Long & McQuade for the last 16 years where he was instrumental in helping people to fulfill their own love of music.

He developed an interest in the real estate market and truly enjoyed meaningful relationships in that arena.

An avid world traveller, he visited many points on the globe.

He also had a love for reading, history, crosswords and basketball.  In retrospect, the Raptor’s win last season was one of the best gifts he could ever have received before leaving us.

Tony was loyal, generous, thoughtful and considerate.  He felt the art of person to person communication was an important element of societal wellbeing and always made a point to thank the people he encountered.

This was never more evident than in his recent interactions with the medical professionals involved with his care at Sunnybrook Hospital, Oakville Trafalgar Memorial Hospital and Ian Anderson House.

He was incredibly appreciative and respectful of all of their efforts. Tony and Andrea temporarily moved to Oakville to live with his brother Argy’s family in order to receive treatment.

Both of his parents, Mary and Ted joined “the tribe” there too.  We were all in it together with Tony as our nucleus.  There was a lot of love, light and devotion in the house.

He had his own cheerleading pack and we tried everything we could to turn the battle around. No one tried harder than Tony.  That his funeral will be held the day before Christ’s birth feels like the full circle of life to us.

Rejoice with the Angels Tony…it’s a gain for the heavens.

Special thanks to the wonderful staff and volunteers at Ian Anderson House in Oakville, Sunnybrook Hospital in Toronto, and Oakville Trafalgar Memorial Hospital and the Oakville Cancer Care Centre.

Donations to the Canadian Cancer Society are appreciated.