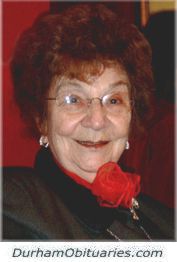 Ninety three years ago a little baby girl drifted down the Oshawa Creek on an ice flow, landing at the house her dad built at 313 Nassau St.

This is the story her mom, Lilian Pearl Kirkpatrick (Luke) and her dad James Albert Kirkpatrick told her siblings, Evelyn, Florence, Glad Sale (Dud) Violet Ishii (Royal) and later to be born into the family Roger (Bud).

Her happiest times as a young girl growing up were the summer months spent at Lynn Brook Park with her family where she would meet her future husband Harold Walter (Buzz) Bezzant in the summer of 1940.

During the summer of 1941, Jeannie developed Tuberculosis and spent the next two and a half years at the Weston Sanitorium lying flat on a bed, eating by mirrors.

Buzz would faithfully take the bus to see her every weekend and on February 14th, 1943 asked her to marry him. At first she wouldn’t accept as she didn’t think it was fair on him, to be tied down with a woman who shouldn’t have children. But after many hours of assuring her that they would pass that bridge when they came to it, she said yes.

On December 7, 1943, Mom came home. She had been told that she would be there for at least four years. She showed them, two and a half years. The Tuberculosis in her pelvis was cleared up.

On June 30th, 1944 Jeannie and Buzz became man and wife and the Cinderella love story began until Dad passed away March 14, 1991.

They purchased a piece of land where they built a house, from the ground up together and started a family. First they were blessed with a son, David James (Buzz). Four and a half years later, along came Rosemary Barbara (Buzzy). This Buzz name comes up a lot in this family.

Jeannie lived in the little house that her and Buzz built. She had said the only way they would ever get her out was to roll her out, and in true Jeannie style, they did. She got her wish.

Her children would grow. Jim married Anne Webb (Anne passed in 2015 and her Dave still misses her with all his heart) grandchildren came Robert (Buzz), Lisa & Michael (Buzz).

Lisa married Chad Craft and gave Mum a beautiful GREAT GRANDSON Cameron she was his Nana Coco Bezzant. She could finally brag that she was a great grandma and that she did.

Michael married Jessica Verge. Rosemary would give her Daniel Rogers (referred to by his Gramma as Angel).

Later on Rosemary married Jeff Estey (referred to by Mum as Jeffory Dean) and they gave her 3 furry grand babies   Daniel was the luckiest of us all he stayed with his Gramma for a while, and you never knew what the two of them were up to.

Daniel married the love of his life Edie Potgieter & Mum was blessed with a second Great Grandson Kevin.

There wasn’t a kid who didn't want for Mum to be theirs, she was a hero to every kid in the neighbourhood, from healing scraped hands or knees to mending broken hearts, she always there for all of us.

Barry (Butch) Magill would be the first to be taken under Mum's wings and that is just what she did, later to make room for Laura (Butch's wife). She loved you both dearly as if you were her own and we consider you both as such.

Butch and Jim had many adventures together causing Mum to go prematurely grey (Book all of its own). There was a family across the street and with a little girl called Mary Ellen (Ellie) Hurst that would come over every Sunday (as a child) push Mum aside and twirl in the hallway to show Dad (she called him Buzz) her Sunday dress.

Ellie never forgot Mum even after she grew up, married and had a family of her own coming all the time with smoothies and meals that her and Gary (Ellie's husband) made. You held a special place in Mum's heart. Thank you for all your kindness and love given to Mum.

November 6, 1996, Mum was in a car accident & life would change drastically for her, it would never be the same due to injuries.

Mum lost her best friend and partner in crime Claris Lack and life slowed down. Then Jill and Mike Workman not only moved in next door but moved into Mum's life and boy, life was about to change for Mum.  They gave her the time of her life and loved her dearly as she loved them, she would never be alone when we weren't there. Thank you for the love and protection you gave her, we would have lost her a few years back if you hadn’t been there and squealed on her.

Patricia (neighbour & friend from across the street) and Mum would form a very close friendship. If Pat called Mum and there was no answer she would coming flying across the street to make sure she was safe. Pat even did that after she moved away.

Boy between Pat and Jill, Jeannie B couldn't get away with anything without us knowing (as she had been hiding illness from us).

Even while she was ill, she crocheted many prayer shawls for the others to comfort them, in fact just the week before she went to hospital she had completed 7 more shawls, but never lived to be at the blessing.

She always thought of others. Mum enjoyed life, her family and many friends, she was always there to brighten others' lives.  She will be terribly missed by all, but she will never be forgotten.

A service will be held in the chapel on January 3rd at 1:00pm. Interment and reception to follow.

All are welcome to attend and celebrate her amazing life.  Please be sure to bring your smiles, she wouldn't want it any other way.