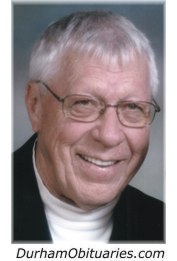 GRIFFIN, Richard Gordon - Passed away peacefully in his sleep at the age of 84 on December 24, 2019, after a seven-week stay at The Meadows Home for Special Care in Yarmouth, Nova Scotia.

Born in Rayndardton, Yarmouth County on December 9, 1935, he was a son of the late John William and Rose Ann (Morris) Griffin.

He was employed with the Toronto Transit Commission and GO Transit for most of his working life.

Since 1996, Richard passionately donated many hours of his time volunteering with St. Vincent Pallotti’s Kitchen, operated by Durham Outlook for the Needy, serving most vulnerable members of the Durham region.

Upon moving to Yarmouth, Richard continued on his journey of faith by attending St. Ambrose Co-Cathedral and joining the Knights of Columbus Msgr. William A. Penney Council 2181 and the Msgr. W.E. Young Fourth Degree Assembly 1428.

Richard is survived by, and will be dearly missed by his loving wife, Anitra (Vacon) (LeBlanc) Griffin of Arcadia; his dear children John and Debbie Griffin of Oshawa; brother David of Victoria, B.C., and Norman “Skipper” of The Meadows, Yarmouth; sister Mae Gallagher (Gerald) of Courtney, B.C.; special niece Linda (Ross) Patey of Whitby, ON, and a wide circle of nieces, nephews and cousins.

Aside from his parents, Richard was predeceased by his first wife Corinne (Boudreau) Griffin, the mother of his children; his brother George William “Bill” Griffin; his sister Frances, and sisters-in-law Irene and Diane Griffin.

A special thank you is extended to Dr. Natalie Horton, Dr. Julie Chandler and Dr. Lisa Gillis, along with the nursing staff of The Meadows for the compassionate care offered to Richard.

Donations in Richard’s memory may be made to St. Gertrude’s Building Fund or to The Kidney Foundation of Canada.

Online condolences can be shared at makfuneralhome.com.

“Think of me as you walk by.
As you are now, so once was I.
As I am now, so you will be.
Prepare yourself to follow me.”