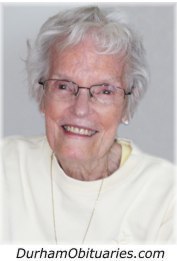 SPICER, Clare (Cable) - It is with great sadness that the family of Madeline Clare (Cable) Spicer announces her passing at the age of 86, on Friday January 17th, 2020, surrounded by family at her residence in Whitby.

Clare was predeceased by her husband of 61 years Jim, her parents Fred and Pearl Cable, her son David, her son-in-law Harvey, her siblings Freddie, Donnie, Doreen, Anne, Philip, David, her brother in law Peter and great grandson Ryan.

Clare is survived by sisters Mary (Tom), Judy (Claude), Madeleine (Blair), Angela and brother Paul (Connie).  She will be greatly missed by her sisters-in-law Joan, Pat, Catherine and brother-in-law Lloyd.  She will also be missed by her many, many, nieces and nephews and cousins.

Donations may be made to The Daily Mass or the Multiple Sclerosis Society.

“Earth has no sorrow that heaven cannot heal.”