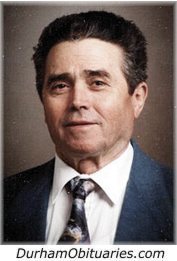 It is with great sadness that we announce the sudden passing of Luciano Labriola at Lakeridge Health in his 92nd year with his wife, daughter and grandson Adam by his side.

Beloved husband of Concetta (nee D’Amato) for over 65 years.

Predeceased by his parents Luigi Labriola (1989) and Maria Leonarda Maglione (1940).

Luciano was born in Savignano, Irpino, Italy and immigrated to Canada in 1958. Shortly afterwards his wife Concetta and children Mike and Anna joined him and they settled in Oshawa to raise their family.

After 25 years of service he retired from Lasco Steel (Gerdau) Whitby at the age of 65.

A heartfelt thank you to the Emergency Acute Care and the Supportive Care Unit (4F) staff for their loving care and compassion.

In lieu of flowers or an expression of sympathy, donations can be made to the Lakeridge Health Foundation - This email address is being protected from spambots. You need JavaScript enabled to view it..