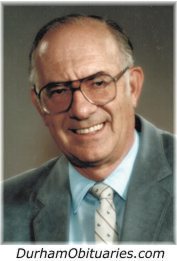 - It is with profound sadness that the family of Howard Toaze announce his passing on February 9, 2020.

The son of Clarence and Anne Toaze, he was predeceased by his beloved wife, Gwendolyn Kerr and by loving sisters Eira, Eileen and Kathryn, survived by sister Grace, nieces and nephews.

Loving Grandfather of Ursula and Anna.

Howard was the great, great grandson of Richard Nelson and Mary Toaze who arrived and settled in Stouffville, Ontario in June 1837.

A 40 year employee of General Motors and graduate of G.M.I., Flint Michigan and a member of Phi Kappa Epsilon Fraternity.

Active in many activities over the years, his first loves were golf and sailing. Howard was a life member of Pebblestone Golf Course.

He considered Pebblestone staff as family and the course home. He treasured his life membership more than any other award or recognition he received during school, employment and retirement years. There were many magical moments.

Howard spent his last years at Taunton Mills in Whitby.

The family is deeply appreciative of the care and compassion provided by all the staff and caregivers at Taunton Mills.

Howard often emphasized: That when the one great scorer comes to write against your name he writes not that you won or lost but how you played the game-on and off the course.

Private service will be held at THORNTON FUNERAL CENTRE.

On line condolences may be made at  etouch.ca.