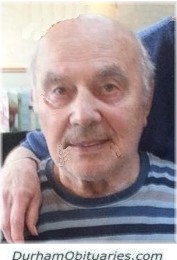 It is with heavy hearts that we announce the passing of our father on Wednesday, March 25, 2020 at Hillsdale Estates.

Heinz joined his loving wife of 70 years, Anneliese, peacefully and with family. Born January 20, 1925 in Germersheim, Germany, he became an electrician and worked for the town.

He married Anna in 1949 and 2 children soon followed, Bernd and Brigitte.

Heinz worked as an electrician during the day and a movie projectionist by night.

He and his friend emigrated to Canada to make better lives for their young families.

The wives and children followed by ship a year later.

Heinz found work as an electrician at General Motors.

He retired after 30 years in 1990. They bought a house on Denise Dr. and raised 2 more daughters, Connie and Monica.

They built a close group of friends that became family. At gatherings, Heinz always provided the music with his accordion and singing while mom danced and sang. Both loved to sing and had belonged to choirs when young. They were members of Club Loreley for 50 years.

Heinz was one of the founding members of the Loreley Sanger and a director. With the choir came another group of friends. And a very long and active social life! There were many choir picnics at View Lake or various cottages.

Or celebrations at homes. These were always accompanied by lots of food, laughter and of course song! Oh and coffee and cake! Heinz had a sweet tooth and loved a good cup of coffee!!

Thank you to all his friends for their support and treats over the years; especially Maria and Willie and Julie and Hans.  Heinz was proud of his heritage and of his family. He was a perfectionist and handy. He planned and built many things. He was a man of strong convictions and not always easy to deal with!! But he was fair and always there when needed.  Heinz lived by his watch and schedule. It drove Mom nuts!! He liked to watch Dr. Oz and Dr. Phil, and they both loved soccer.

He was a proud Opa. He attended many hockey and soccer games! The apple of his eye was his great-grandson Kaiden.  Heinz will be sadly missed but fondly remembered by his children; Monica Ottinger (Terry Schriver), Connie Pugliese (Bill Kendrick), Brigitte Dewar of Barrie, ON, and Bernhard Ottinger (Hildegard).

Thank you to the staff at Hillsdale, Honey Harbor for their care and compassion. We were still able to be with Dad, but many won’t be able to due to the virus. Our thoughts and prayers are with you. We wish you and all the health care workers strength and courage to get through these difficult times.

Thank you! Thank you Dad and Mom for everything. May your voices be strong and clear and may you rest in peace, you’ve earned it. Until we hear you sing again, you are forever in our hearts.

Online condolences may be left at armstrongfh.ca.