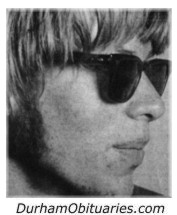 It is with a sad song from our hearts that we announce Monday April 6th, 2020 was the day the music died.

Andy Gondek left this world from the Ottawa Hospital after living a life fully on his terms, with no apologies for his rock and roll lifestyle. He was in his 69th year.

He is also fondly remembered by his son Noel (Melodie) and daughter Stephanie (Craig Walker).

Andy was the grandfather of Dillon, Taylor, Joseph, and Sabina-Jane.

He will also be missed by his beloved cousin Alicja Wajdzik.

He was predeceased by his parents Andrew and Stella, and his brother Richard (Elizabeth).

Andy will be missed by his family, friends, and of course, the many, many fans that have faithfully waited for a return to his 1969 brilliance.

Andy’s passions were his music and songwriting. When asked how he wanted to be remembered he said, “I wrote over 700 songs, 70 were gifted, and 7 were absolutely brilliant.”

He also excelled at a form of armchair philosophy that was rooted in cutting sarcasm and existential nihilism. One of his favourite Einsteinian digs was “the difference between genius and stupidity is genius has its limits.”

A Memorial Mass will take place in the future at St. Hedwig’s Polish Catholic Church, when gatherings are allowed once again.

Andy's parting words for whomever reads this is, “my goal has always been for the audience to sing the chorus without me.”

For online condolences and to share stories with the family, please visit armstrongfh.ca.