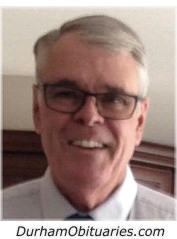 Passed away peacefully at Lakeridge Health Oshawa, on April 13, at the age of 66.

Beloved husband of Janice for 44 years. Cherished father of Bryan.

Robert will be dearly missed and fondly remembered by his extended family and friends.

In light of the current situation, a memorial service will be held at a later date to be announced, and details will be published as soon as they become available.

If desired, memorial donations to the Canadian Cancer Society are greatly appreciated.

Online condolences may be directed to  courticefuneralchapel.com.