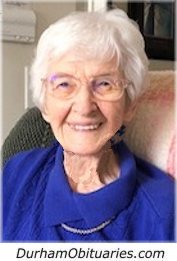 LOCKWOOD, Klara Elizabeth  -  (1920 - 2020)  It is with sad hearts that Klara’s family announces her recent passing on Sunday May 17th, 2020, one month shy of her 100th birthday, peacefully and surrounded by the caring staff at Traditions of Durham Retirement Home in Oshawa, her home for the past seven years.

Klara was born in Hollohaza, Hungary and immigrated to Canada with her 2 brothers and 2 sisters in 1929 to reunite with their parents Gizella and Rudolph Schubert who had preceded them to Canada in their quest for a new life for their young family, settling in Oshawa, a place that Klara would call home for the remainder of her life.

Klara was predeceased by her sisters Gizella Kratz and Ottilia Schubert as well as her two brothers, Julius and Alfred Schubert.

As well as being survived by her three children, Klara leaves behind six grandchildren and nine great-grandchildren, all of whom will deeply miss their beloved “GG”.  In 1996, Klara married the late John (Jack) Lockwood and is now survived by her step-daughter Mary Lou Taylor and step-son Paul Lockwood (Connie) and their families.

Klara’s family wish to express their gratitude and appreciation to the staff at both Oshawa and Bowmanville hospitals for their care during her stays following a broken hip earlier this year and to all of the staff at Traditions of Durham who took such loving care of their mother in the final days of her life.

As per Klara’s wishes there will be no public funeral but rather a private family service will be held at a later date at McINTOSH-ANDERSON-KELLAM FUNERAL HOME LTD., 152 King St. E., Oshawa (905-433-5558), following which her ashes will be interred along with those of her late husband in the Lockwood family plot in Union Cemetery.

In lieu of flowers, donations made in Klara’s memory to a CHARITY of choice would be greatly appreciated.

Online condolences may be made at makfuneralhome.com.