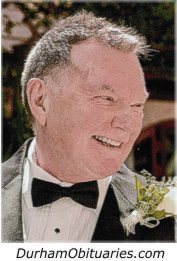 After a short and unexpected illness, we are sad to announce the passing of Dale Thomas Whitehead on May 17, 2020, just a few weeks past his 70th birthday.

He leaves behind his wife Sheila, his children Sean (Jennifer), Ryan (Jessica) and Melanie (Greg) as well as his cherished grandchildren Emily, Elliott and Kacey Whitehead, Cameron and Madison Whitehead, and Ivey and Charlie Czajko.

He will be sadly missed by his brother David (Helen), his cousin Sharon (Bert) and his many nieces and nephews.

He will be missed as well by Jane Havens and her extended family and the family of the late Janet Ivens, as well as Shelia’s daughters Meaghan and Melissa.

He was born May 1, 1950 in Kirkland Lake Ontario, but spent his younger years in Agincourt, surrounded by family and friends. He lived for 15 years in Markham, where he raised his family, coaching and playing hockey, soccer, baseball and curling.

He moved to Oshawa in 1995 and has been a proud member of the community there ever since.

Dale was proud of the years he spent as a member of the Ontario Provincial Police, but spent most of his career working in industry.

He valued his years with Honeywell, and happily retired to the golf course in 2013 from Grace Canada.

Dale was a man who stood strong in who he was, stood firm in what he believed, and stood by the people he cared about. He will be missed by many, and is resting at  ARMSTRONG FUNERAL HOME.

At Dale’s request, the family would welcome any donations be directed to the Heart and Stroke foundation.

For online condolences or to share stories with the family, please visit armstrongfh.ca.