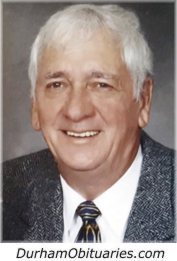 “Death is nothing at all.  It does not count.

I have only slipped away into the next room.

Laugh as we always laughed at the little jokes that we enjoyed together.

Play, smile, think of me, pray for me.

Let my name be ever the household word that it always was.

Let it be spoken without an effort, without the ghost of a shadow upon it.

I am but waiting for you, for an interval, somewhere very near, just round the corner.  All is well.”  - Sir Henry Scott-Holland

With his family by his side, George entered final rest after a courageous 11-year battle against cancer.

George was born and raised in Bathurst, New Brunswick. As a young man he left his home town and moved to Oshawa, Ontario, where he raised his family and embarked on a 35 year career with the Toronto Star in circulation sales.

Upon retirement George enjoyed a number of pursuits, but was most proud to serve as Grand Knight (1999-2001) with the Knights of Columbus St. Joseph the Worker Council 9989 and was a fourth degree member of the Monsignor Bench Assembly (0878) in Oshawa.

He enjoyed his bike and headed out most mornings for a 25 km ride. George and Adeline appreciated the opportunity to travel together, exploring new destinations near and far.

But most of all, George enjoyed the simple pleasures of reading his newspaper, watching the Toronto Blue Jays or Toronto Maple Leafs from his recliner, long car drives, coffee at a nearby Tim’s, or sitting on the backyard swing, Adeline always by his side.

Predeceased by his parents Lee and Leona and siblings Bernie, Danny, and Bonnie.

George is survived by his sisters Sue and Paula, and brothers Bill (Patricia), Ray(Judi), and Don (Carol).

Cremation has taken place. A celebration of life will occur at a later date for family only.

Online condolences may be made at courticefuneralchapel.com .

In lieu of flowers, donations may be made to St. Joseph the Worker Parish Building Fund in Oshawa, or a  CHARITY of your choice.