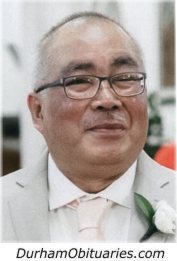 CRUZ, Manny Cruz   - On July 13, 2020, Manolo Fernandez Cruz suddenly passed away at the age of 59 due to liver cancer and fought bravely over the years being diagnosed with rare chronic myelogenous leukaemia.

He is best known as “Manny or Long” who was born on August 31, 1960 in San Fernando, La Union Philippines to Flora Cruz and to the late Tomas Cruz.

Manny graduated from Saint Louis College in 1981 from Bachelor Science in Accounting.

He worked in Riyadh, Saudi Arabia as an accountant for 2 years at a hospital. He migrated to Toronto, Canada in 2001 in order to provide a better life for his family.

He had an early retirement working for TD Canada Trust for over 14 years.  Manolo is a loving husband to Amy Cruz, an accountant and his college sweetheart.

On November 16, 1986, they welcomed their daughter Mary Fatima Cruz who became an important part of their lives. Manny is a very protective and caring father to Mary who always want to give her the best. He became a kind father-in-law to Dennis Kim on May 25, 2019.

He loves to play guitar and is very fond of watching basketball, action movies and history. He used to coach basketball during his prime and ice cream is one his favourite things to eat.

He had been an active chapter servant for the Missionary Families of Christ in the Scarborough Central Community where he leads groups of families in order to help strengthen their faith in God and he loves to play worship songs when he serves the church.

He definitely carried out God’s mission with sincerity and passion.

He will be deeply missed and remembered as the most humble and gentle person by his friends and loved ones.