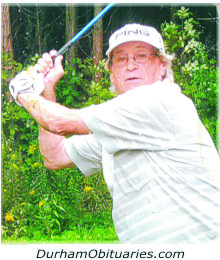 It is with great sadness we announce the sudden passing of John David Grieve on August 14, 2020 in his home at 72 years.

Cherished son of the late David and late Violet.

John will be dearly missed by his many friends, his golfing buddies, his colleagues at Mills Motors and the crew from Double M trailer park.

There will be a little less laughter in the world with the loss of John and his quick wit.

“A Life is Like a Round of Golf”
By Criswell Freeman:

Life is like a round of golf
With many a turn and twist,
But the game is much too sweet and short
To curse the shots you’ve missed.

Sometimes you’ll hit it straight and far
Sometimes the putts roll true,
But each round has its errant shots
And troubles to play through.

So always swing with courage
No matter what the lie,
And never let the hazards
Destroy the joy inside.

And keep a song within your heart
Give thanks that you can play,
For the round is much too short and sweet
To let it slip away.