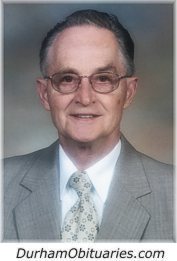 Age 91, of Oshawa.  With heartfelt sorrow we announce his passing on Sunday, August 16, 2020 at Lakeridge Health Oshawa.

Born in Kentville, NS on January 24, 1929, Philip was the first child of Paul and Beulah Zwicker.

Beloved husband of Thelma (nee:Cassel) for over 61 years.

Philip grew up in rural Nova Scotia where he developed a love for the outdoors and a lifelong passion for fishing.

As a young man Philip joined the Canadian Armed Forces and that brought him to Ontario where he would eventually meet and marry Thelma and raise their family.

After the Army he worked for Ford, Ontario Malleable Iron and achieved over 28 years service at General Motors retiring at 65.

Philip enjoyed his retirement fishing, reading, watching favorite tv shows and sharing the couch with his dog Zac.  For Philip, spending time with his growing family was a source of joy.

Visitation was held at the  ARMSTRONG FUNERAL HOME (124 King Street East) on Saturday August 22nd from 12-2pm.  The Funeral service, officiated by Pastor Bob Ernst, was held in the Chapel at 2pm and interment followed at Thornton Cemetery Oshawa.

A Celebration of Life will be held at a later date.

The family expresses appreciation to the  ARMSTRONG FUNERAL HOME and Thornton Cemetery.