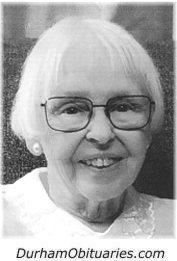 With sadness and fond memories we announce the passing of Elinor Kidd, wife of Clare for 63 years and mother of David and Ian.

Elinor was the sister of Carol Hardy, Steven and Norman Snelgrove, and Jan Woods.

Elinor started her teaching career in Oshawa and she was a teacher-librarian in Whitby, Ajax, and Pickering.

She was a life-long member of the choir at St. Mark’s United Church in Whitby and she sang with the County Town Singers.

Her experience in choral singing was reflected in the excellence of the school choirs that she directed.

Elinor’s energy and enthusiasm were evident in everything she did.

She was a Past President of the Canadian Club in Oshawa and the Durham Region Concert Association. She was an active volunteer with the Oshawa Symphony and the Station Gallery in Whitby.

She enjoyed her association with the Friends of the Library in Oshawa; books and camaraderie were a winning combination. An annual event she enjoyed working towards was the reunion for the Whitby High School “grads of another era.”

When our boys were ready to join Scouting she became a Beaver leader and when they were in competitive swimming she was involved with the swim club.

Elinor was talented in food preparation and with a close friend, ran a catering business. Her Lenten Lunches at St. Mark’s were famous.

During two provincial elections she was the Returning Officer for Whitby and she also worked at Elections Ontario.

At home Elinor was never still - knitting, doing needlework, or sewing a new garment that might be hemmed on the way to the party. Her day started with the crossword in the morning paper and after a full day would end with a meal that was “just right.”

Her enthusiasm and cheerful smile will be missed by all who knew her.

Elinor’s final journey was eased by the compassionate care she received from the staff at the Lakeridge Cancer Clinic and by support received from The Princess Margaret Cancer Foundation.

Memorial Donations to either of those institutions would be appreciated.