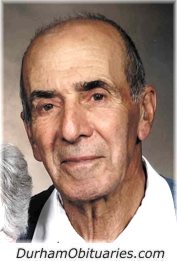 FAIRHART, Michael Henry - With broken hearts, the family of Michael Henry Fairhart shares the news that Mike has finally moved to the front of the chairlift line and has been granted a perpetual ski lift pass along with a guarantee of bluebird weather and pristine snow conditions.

Born in Oshawa June 17, 1923, Michael was predeceased by his wonderful wife Marion and his daughter Sheila.

Family was always Mike’s number one priority, with him sharing his love of downhill skiing, golf, tennis, music and the outdoors with his immediate and extended family.

While he made plenty of time for fun and recreation during his retirement years, giving back to the community was his second priority where his time was spent delivering Meals on Wheels, driving cancer patients to and from Toronto, volunteering with a number of disabled ski programs; the list goes on.

Mike’s children would like to thank the wonderful staff of Hillsdale Estates and, in particular, the staff of Pineridge Place.

Their loving care and devotion to Mike during his time at Hillsdale was second to none.  The recreation and music programs, along with weekly pubs and bingos helped to make his final years most enjoyable.

A celebration of Mike’s life will be held at a later date.

In lieu of flowers, donations in Mike’s memory to either the Alzheimer Society of Durham Region or SickKids Foundation would be appreciated.

Online condolences can be shared at makfuneralhome.com .