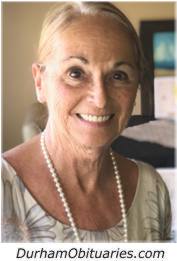 FERGUSON, Brenda Ferguson  - Age 72, passed away suddenly but peacefully on September 14, 2020, in her sleep.

She was predeceased by her first husband, George, in 2016.

At the time of her death, she was very excited to create a new chapter in her life, with plans to marry her loving boyfriend, Reid Leighton. Next to her bedside was her new wedding dress and wedding bands.

For many years, her full-time job was raising her two children, Todd and Tracey, who survive her.

She was devoted to running a safe, loving household.

Later in life, she began a career with the Ontario Ministry of Training, Colleges, and Universities, where she worked until her retirement at the feisty age of 68.

She often had to commute over three hours daily, but always looked forward to seeing the wonderful people with whom she worked. Wherever she went, she made fiercely loyal friendships, whether with neighbours, pharmacists, workmates, or family.

Brenda had so many passions throughout her life. She was meticulous in recording her family’s genealogy, with research through relatives and foundations. She was well versed in her father’s contributions to the war effort during WWII. She was a Civil War aficionado.

Above else, Brenda was a proud Maritimer who missed her home in New Brunswick.

In addition to her children, Brenda is survived by her sister and husband, Barbara and Lindsay Schafer, her niece Katie, her grandson Jordan, her son-in-law David, her daughter-in-law Michelle, and her step-grandchildren Eric, Nicole, Jordan and Madelynne.

Please join us in celebrating her life this Saturday, September 26, 2020, between 1:00 pm - 3:00 pm at the DESTEFANO FUNERAL HOME in Oshawa. Masks are required.

In lieu of flowers for Brenda, we are thankful for donations sent to the Lakeridge Health Cancer Care, whose cancer centre was so incredibly supportive and thoughtful throughout her treatments.

At a future date, the family fully intends to honour Brenda’s final wishes to have her ashes scattered in the Bay of Fundy, once travel restrictions are levied. Those close to Mom in New Brunswick will be apprised of any plans.