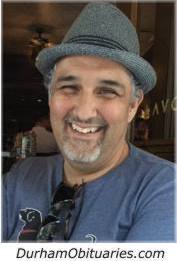 We are deeply saddened to announce the sudden passing of Frederick George Bartley on September 27, 2020 at the age of 52 after a complication from a pre-existing illness.

His memory will be forever cherished by his wife of 19 years Jana and their daughters Rachel (17) and Ashley (15), mother Judy Bartley (widowed from Fred Bartley Sr.), sister Kelly, brother in law John, and his large extended family of several aunts, uncles, cousins, nephews and niece.

Fred is a proud member of the Serpent River First Nation, his ancestors were signatories to the Robinson Huron Treaty.

Fred was a 20-year veteran of the Toronto Crown Attorneys office and during that time he was instrumental in providing insight and support to Indigenous initiatives, including the creation of the Gladue Court at two courthouses in Toronto.

Fred was also involved in numerous education programs designed to address the unique challenges that face Indigenous peoples in the criminal justice system.

In recognition of his dedication and commitment, he was gifted an Eagle feather, seen amongst many First Nations as the highest honour.

Fred was equally committed to volunteering. He gave back to his community by coaching soccer and hockey and volunteering with the Out of the Cold program. Fred also mentored Indigenous students at local high schools and universities.

In the rare spare time Fred had, he somehow still found time to cheer on the Leafs. Ever the optimist, Fred held out hope every year that they would bring home the Stanley Cup.

Fred’s favourite place to relax was up at the cottage with his family where he enjoyed fishing, swimming, water sports with his kids and cruising around the lake in his boat “No Reservations”.  He loved to play hockey and many of his hockey friends I’m sure would agree that Fred spent a lot of time in the penalty box!

Fred’s joviality and good nature attracted people the moment he walked in the room, and no one could forget his infectious smile and sense of humour.

In lieu of flowers memorial donations can be made to Toronto Council Fire or Toronto Urban Native.

Condolences may be offered at mountpleasantgroup.com.