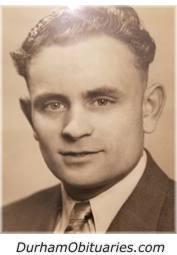 Died peacefully of old age on November 20, 2020 with his beloved family near.

After getting engaged, he immigrated to Canada in 1953 to establish himself as a mechanic before being followed by Ann in 1954, when they were married.

Successful entrepreneur / owner of the first Nissan dealership East of BC, Highland Creek Motors; and later, after selling the business, achieving distinction as a real estate agent.

Devout Catholic and ‘Life in the Spirit’ Leader for the Catholic Charismatic Movement groups in St. Boniface, Holy Redeemer and St. Leo’s parishes; with he and Ann being key fund-raisers / contributors to the building of the new St. Leo’s Church.

Friends are encouraged to post photos and happy memories on the “Memorial Page for Bill OPA Oosterholt” on Facebook.

They are also invited to send their condolences to BARNES MEMORIAL FUNERAL HOME, 5295 Thickson Rd. North, Whitby, L1M1W9 (This email address is being protected from spambots. You need JavaScript enabled to view it. / 905-655-3662) where a brief Private family  viewing will occur on Thursday November 26 from 12 to 12:30 pm.

Funeral Mass in tribute to be held at St. Leo’s Catholic Church, 130 Watford St., Brooklin, L1M1H2 on Thursday, November 26 at 1 pm followed by the burial service at Resurrection Catholic Cemetery, 355 Taunton Rd., Whitby, L1R3L4 where he will be laid to rest beside Ann.

The church can safely accommodate physically distanced people, but we completely understand that people may not attend. However, a video of the service will be made available on the Facebook page later the same day.

For those who wish, donations may be directed to the Alzheimers Society of Ontario, https://alzheimer.ca/on.  We will always be grateful for the values, stubborn determination, and disciplined work ethic that you passed on to our whole family.

If the measure of a man includes the striving from challenging beginnings, his prosperous accomplishments, and the caliber of his offspring, then we indeed have cause to be proud.

We’re all happy for you that your fervent desire to ‘go Home’ has been realized at last and feel certain that you have been wholeheartedly welcomed into Jesus’ kingdom with Ann by your side.