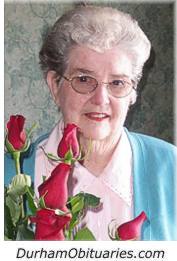 Left to catch up with her later are her loving son Richard Burtch (Barbara), and grandchildren Jamie, Terry, Ryan (Carrie) and Jennifer Candler (Bob).

She was the last child of Charles and Dorothy Wells (both deceased) and a baby sister to May, Charles and Ellen (all deceased).

All of her childhood was spent in the Clarke St. area where she attended Ritson Rd. public school and OCVI high school.

Mary married Samuel Elijah Burtch on June 1, 1940 at Holy Trinity Church in Oshawa. She spent the war years working in Toronto in industry supporting the war. At the conclusion of the war, they moved back to Oshawa were they started their family of one and opened a small restaurant on William St. opposite the GM power house. Unfortunately, Mary and Sam dissolved their marriage in the late forties and she went to work at Smith Transport and Van Husen Motors in Oshawa.

In the early fifties, Mary met Lloyd Haynes and they were married in 1954. They purchased a house on Philip Murray Ave in Oshawa where she lived until 2013. She went to work for Matheson Gas Products in Whitby as an office manager. Lloyd passed away in 1975.

In 1978, Mary met Alvin Parker and they spent the rest of his life together until Al passed away in 2012.  They travelled extensively throughout the world visiting Europe, the South Pacific, Alaska, the United States and the Caribbean. Their most favourite destination was the Canary Islands. Unconventional travel was the norm for them as they went for a cruise on a cargo ship, a river cruise from Hungary to Germany, a bus excursion thru the United States and a cruise to Alaska followed by a bus trip thru BC. Travel across Canada from Oshawa to Vancouver was customarily done on a train. They would be gone for months at a time.

After Al passed away, Mary went to live at Traditions of Durham were she resided until 2018.  Unfortunately, her health declined and she went to live at Sunnycrest Long Term Care home in Whitby.  Many thanks for the care and attention she received from the folks at Sunnycrest. They kept her safe and comfortable in her final years.

Donations in memory of Mary would be a lasting memorial to her.  She supported the Canadian Cancer Society because of the loss of her sister to that dreaded disease and the Hospital for Sick Children.

In these unprecedented times, a celebration of life will be announced at a later time.

Online condolences can be shared at makfuneralhome.com.