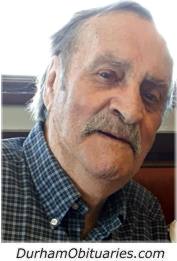 Passed away peacefully at ThorntonView Long Term Care Home on Saturday, December 12th, 2020 at the age of 88.

Beloved husband of the late Brenda Losier for 45 years.

Special friend and companion for 16 years to Janine.

Brother-in-law to Brenda's family in England and Wales: Barbara (Jack), Susan (Fred), the late Erik (Ida), the late George (Helen), the late Ged (Carole). Roger was an uncle to numerous nieces and nephews.

Due to Covid-19, a private family service will be held.

Roger was a loving family man, who enjoyed playing cards, a round of golf, a cup of coffee with his friends and was a gifted craftsman.

A special "Thank-You" to the nurses and staff at Thorntonview for taking care of Dad for the last two years and enjoying his special sense of humour as much as we did, and to his friends Henri and Bert for their much appreciated visits.

Donations in memory of Roger may be made to the Alzheimer Society Durham Region.