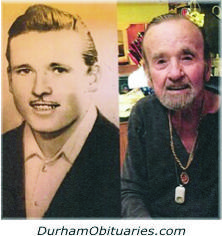 Danny was born in Belgrade, Yugoslavia. He lived through the horrors of an impoverished nation during the Second World War.

He was a star soccer player for many years, including playing for the national championship for his country.

In 1957 he came to Canada and landed in Montreal. From there he moved to Toronto, then Hamilton, and on to Sudbury. He held several jobs including working in the mines, driving transport trucks and also as a cook.

In Sudbury he had a son named Branko (Bobby). He met Viola when he went into the convenience store she owned. Viola was a widow with 3 children Bernard, Carol, and Brian.

They moved to Oshawa in 1964, where he opened his interior decorating business and painted a lot of beautiful homes. He then worked for Fittings and then Lasco Steel, retiring in 1996.

Their relationship lasted until Viola passed in 2000. From this relationship they had a daughter named Donna.

He was a very loving and caring father. He was generous to a fault.

He really enjoyed telling anyone who would listen all of his interesting stories. He was a lover of all sports, animals especially birds (pigeons and cockatiels).

He was predeceased by his parents Antonina and Jura Devic, his sons Branko and Brian, and his daughter Carol.

He leaves behind his son Bernard (Helen) and daughter Donna (Andy), his many grandchildren and great grandchildren.

Memorial donations to the Hospital for Sick Children Foundation or the Make a Wish Foundation would be appreciated.