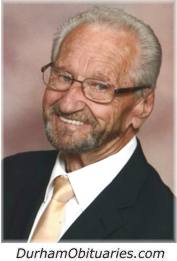 Passed away January 15, 2021 peacefully in his sleep after a battle with cancer.

Loving husband of Olga, who would have celebrated 60 years of marriage on April 29, 2021.

Sadly missed by his daughters Lori (Dale) and Thresa (Donovan). They were so proud of their Dad, he was their hero.

A special thank you to Doctor A Kopolovic and nurse practitioner Jane Huynh for your care and support for Ted. Also, Doctor Azi, and Nurse Julie and Cassandra. PSW Evelyn for taking care of Ted.

Ted worked at various jobs throughout his career. He worked at G.M. in 1956. Ted then joined the Oshawa Fire Department in June of 1963. He became Captain in 1981 and was then promoted to Acting Platoon Chief in September 1990.

Retiring in May, 1992, Ted and Olga then travelled the world and Ted pursued his passions such as golfing and fishing.

Due to Covid Restrictions, the service will be attended by invite only. The live stream will not start until 10 minutes before the funeral. The link will be posted just prior to the service.

Memorial Donations to the Muscular Dystrophy Canada (Help Fill the Boot) Foundation, the Alzheimer Society of Durham Region or Canadian Cancer Society would be greatly appreciated.