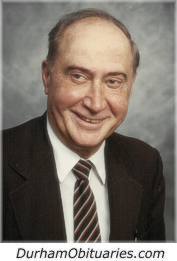 Predeceased by his beloved wife Anastasia.

Loving father of Ihor and George.

Dear brother of the late Mykola, who was killed in action in the Russian Tank War by German dive bombing units.

Leon was a fighter pilot, who fought on the side of the Russians, and flew an American Bell P39 Air Cobra over the Eastern front to stop the Nazi advance in 1944.

He was a great writer, poet and public speaker.

He spoke pedagogically at many English and Ukrainian functions about such topics as education, literature and Ukrainian heritage heroes.

He was Acting Principal of the Ukrainian Heritage Night School, a Durham Board of Education accredited course of study during the 1980’s and 1990’s.

Leon spent 33.5 years working as a General Motors Auto Worker in the truck plant assembly as a Line Inspector.  He was also an avid fisherman, great handyman and really amazing Dad.

Registration for visitation is required, as space is extremely limited.

A Private Family Mass will be held on Monday, February 1, 2021 at  ARMSTRONG FUNERAL HOME.

If desired, donations may be made to the Alzheimer Society.