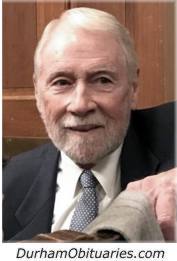 Comforting him in his final moments were his loving partner Nancy Chavner and his children Susan, Mark and Christopher.

A conventional family man, he was not, but you’d be hard pressed to find both a man who loved his family more and a family who loved him with as much gusto in return.

In addition to the unconditional love he had for his children and their partners, he was a fun and playful Papa to eight grandchildren and four great grandchildren, all of whom enjoyed each moment they spent playing together or quiet times telling stories.

Returning a smile to his face in his final days were the calls he received from close friends and family who were unable to visit due to pandemic restrictions.

Throughout his life, he was a caring older brother to his siblings Bob, Bill and Anne and made a point of visiting them and their families as often as possible.

The only living person who grew up with Barry and knew him his entire life is Clare Fuller – although technically his aunt, she was more a best loved older sister given their seven-year age difference.

From an early age, Barry had a strong work ethic. It was ultimately his talents in the construction trades that landed him a job at Toronto’s Hospital for Sick Children from which he retired as Project Coordinator, Research Institute in 2005 after 24 years of service.

Barry’s family acknowledges and thanks the team of medical professionals at The Temmy Latner Centre for Palliative Care for their care and compassion.

Since we’re unable to gather right now to celebrate Barry’s full and colourful life, his family encourages everyone to follow his lead and reach out often to close friends and family and love them unconditionally – and if you’re so inclined, toast his well-lived life with a wee dram of Irish Whiskey.