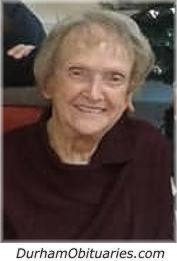 With heavy hearts and profound sadness, the family of Jessie McPhail (nee Weir) announces her passing at ThortonView Long Term Care Centre due to complications from Covid-19.

Jessie now joins her loving husband and lifelong partner John BB McPhail (2001) to whom she was married for over fifty years.

Jessie was predeceased by her parents John and Jessie Weir and her siblings Danny, John, Robert and Susan (Cissy).

Jessie will be remembered lovingly by her children Christine, Susan and her spouse Barry, and by her grandchildren Travis, Shannon, Nathan, Emma, and Sabina. Lastly, she will be missed by her great-grand-child Katie.

Jessie will be remembered fondly by her family in New York, Scotland and by her countless friends from both near and far.

Jessie lived a vibrant life that was punctuated by service and hard work.  Jessie served in the Royal Air Force during the Second World War before immigrating to Canada in 1952 from Glasgow, Scotland.

It was during this time that Jessie demonstrated the importance of hard work to her children by taking on many jobs to help support her family. Jessie especially enjoyed her job in the paint Department of Sears where she worked for over fifteen years.

Jessie was considered the spark of the family, possessing a quick wit and a keen mind.

She had a wonderful sense of humour and continued to laugh and tell stories throughout her entire life.  Often those stories were accentuated with song as Jessie loved to sing and had a lovely voice that was often heard floating throughout her home.

Jessie blessed her family and friends with many homemade gifts provided through her multitude of talents.

Many people still have Jessie’s beautifully handwritten notes, calligraphy cards, and well-made crafts as precious mementos from this kind soul.  There are many beds that are still adorned with a hand-knitted afghan made by Jessie. These blankets were made to last and endure the test of time by a woman who was made the same way.

Online condolences may be shared at makfuneralhome.com .