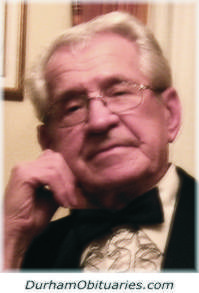 Jan was born in Mokrsko Dolny in Kielce, southern Poland, on the banks of his beloved Nida River on June 14, 1926.

He passed away peacefully at Lakeridge Hospital Oshawa on March 5 2021.

When he was just 15 he was taken by the invading Germans and spent the rest of the war as a slave on a Bavarian Farm.

At war’s end he became an employee of the American occupation services and earned the opportunity to emigrate to Canada as a contracted worker in the Kirkland Lake goldmines.

After 4 years he relocated to join the Polish community in Oshawa.

He began his 32 year career with General Motors and became a founding committee member of St. Hedwigs Polish Catholic Parish.

On his 26th birthday, he turned the first shovel of sod, breaking ground for the construction of the church.

John bought property directly across the street from the church where he built the family home for the love of his life, a Polish Canadian girl named Helen Galant and eventually their two children John and Dianne.

He and Helen were fiecyy proud of their grandchildren Christopher,Mary Ann and Kasia. As in all things, John’s Grandfatherly love was filled with tricks and songs and poems and affection.

The family spent decades of happy summers at their cottage in Kaszuby, John’s heaven on earth where he spent his days on endless projects.

His charitable works facilitated the Laski project helping blind children and the acquisition of medical equipment for hospitals in Poland.

John always had a joke or a kind word for all he met. He was a graceful and humorous light in the world, always eager to lend a hand and brighten the day of all he met.

Having suffered through so much in his early life, the kindness and generosity with which he traveled through life was a testament to his faith his resilience, his unflagging love of life and a blessing to all.

The family would like to extend heartfelt thanks to Doctors Peter Noble and Kevin Graham for their years of compassionate attention and friendship. A special thanks to his PSW Jeffrey.

Due to Covid restrictions will be in place and services will be private,

In lieu of flowers, donations can be made to St. Hedwig’s Parish Church in Oshawa.

A Funeral Mass will be held on Tuesday, March 9, 2021 at 11 a.m. at St. Hedwig’s Catholic Church. Interment Resurrection Cemetery. Registration for the visitation and service is required due to limited capacity, please visit www.armstrongfh.ca or call 905-433-4711 to register.

In lieu of flowers, donations can be made to St. Hedwig’s Parish Church in Oshawa.

Online condolences may be left at armstrongfh.ca .