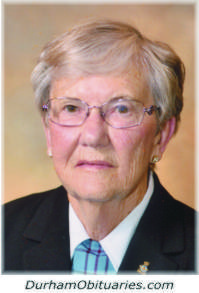 It is with profound sadness that the family of Lillian Russell announces her passing of natural causes on Thursday, March 18, 2021 at Hillsdale Estates – Pineridge Place with her daughters by her side.

Lillian, or “Jo” as she was known by, was born October 31, 1927 in Campbell’s Bay, Quebec and with her family moved to Oshawa as a young girl.

She went on to graduate from the then Oshawa General Hospital School of Nursing as a registered nurse in 1949. She worked for a time in the operating room of the hospital and then moved to the Oshawa Clinic and worked for several of doctors there until her retirement in the early 1980’s.

She is survived by her daughters Sandy Webb (late Keven) and Janie Brentnall and will be greatly missed by her son-in-law Alan Brentnall and her grandchildren Tracy Fox (Shane), Lisa Ellsworth (Dave), Dale Webb, Amanda Webb and Jeremy Webb.

She was predeceased by her parents Alexander (Sandy) and Lurena Stark and her siblings Eleanor Thompson, Marion Bramley and Wilson Stark.

She will also be missed by several nieces and nephews here in Ontario and in California.

The family would like to extend their thanks and gratitude to the staff of Pineridge Place for the care and compassion they extended to mom during her time there and most particularly during these last few weeks.

Because of Covid restrictions, a Private family service will take place.

Memorial donations can be made to Alzheimer Society.