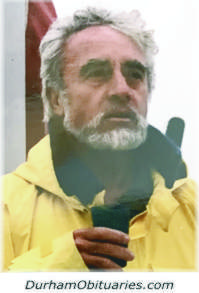 Predeceased by his sister Anne Sabyan.

David was born in Toronto and spent most of his childhood in Brooklin, Ontario where his father was the Bank Manager at the CIBC.

David worked as an electrician at General Motors for many years until his retirement in 1998.

During his tenure at GM he enjoyed the opportunity to train new apprentices as they launched their careers.  His love for sharing his knowledge gave him the opportunity to teach night school at Durham College. He was an avid boater and member of the local Power Squadron.

He spent most of the summer on his large boats all named Popeye and the smaller runabout, named Swee’pea, cruising the Trent River and Georgian Bay enjoying his time with family and boating friends.

He was a hockey coach, swim instructor, and mentor to many.

A Private Mass will be held at Holy Family Parish, Whitby.

Followed by Interment at Resurrection Catholic Cemetery.  Donations may be made to the Alzheimer’s Society.

Online condolences may be placed at  oshawafuneralhome.com .