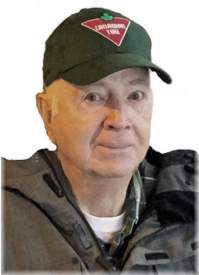 It is with great sadness that we announce the peaceful passing of Eric Erwin Moores on Monday April 12th, 2021, at Lakeridge Health Bowmanville in his 87th year.

Predeceased by his adoring first wife Ruby (nee Rogers), the mother to his children, and his siblings Sadie, Stanley, and Willie.

He is lovingly survived by his wife Dianne (nee Richards), his children Wayne (Judy) and Dianne (Wayne), his grandchildren Jason (Amanda), Joshua (Megan), Kyle (Kendra) and Kymberlee, his great grandchildren Jack, Andrew, Kohl, and Kora, and his siblings Eva and George.

The son of George and Elizabeth, Eric was born to humble beginnings in Bradleys Cove, Newfoundland.

He moved to Toronto at the age of 17 and shortly after married Ruby and began to raise his family.

A self-made man, his career path was diverse, eventually retiring from Canadian Tire in 1992. He was understandably proud of his contributions to the Avro Arrow aerospace program.

After Ruby’s passing, he remarried to Dianne in 2015.

His passions were his family, time at the cottage, good music, great conversation, and a competitive game of cards.

The family wishes to extend a special thank you to Dr. Leon Irish, the staff at Lakeridge Health Bowmanville, and the numerous homecare workers involved in his care.

In lieu of flowers, we ask that individuals make a donation to a charity of their choosing in Eric’s name.

No Public Services are scheduled at this time.