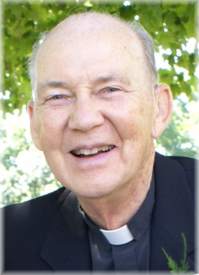 Born in Saskatoon, Saskatchewan in 1928.

Survived by his sister Catherine Roney of Calgary, and his children Paul (Joanne), David, Mary Anderson (Craig) and their sons Colin and Trevor.

Jack was a graduate of Nutana Collegiate in Saskatoon, received a BEng from University of Saskatchewan in 1949 and LTh from Trinity College, U of T in 1956.

Throughout his ministry he worked as a Curate at St. Clement’s Toronto and Rector at St. Paul’s Brighton, St. Giles Barrie, All Saints Whitby and St. Nicholas Birchcliff Scarborough. He retired in 1993.

Jack was a 75 year survivor of Type 1 Diabetes and an avid lover of classical music, books and word games.

Remembered by all who met him, Jack had a story for every occasion. He touched many lives, and lived life to its fullest.

A memorial service and interment will take place at a later date.

Memorial gifts may be made to the Charles H. Best Diabetes Centre.