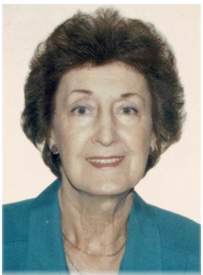 Peacefully on Sunday, April 11, 2021 at Parkview Meadows Christian Retirement Village at the age of 97.

Christine was the cherished wife for 69 years of the late Roy Dell (2014).

She will be forever missed by her son Alan (Bettee) and her daughter Pamela (Ron). Loving and treasured nan of Cindy (Stephen), Alan Jr. (Amy), and Matthew.

Will be sadly missed by her sisters-in-law Pat Granelli and Margaret Harris of England and fondly remembered by her many nieces and nephews in Canada, England and the United States.

Christine was born in London, England.

She came into this world with a wonderfully strong spirit which was reinforced during WWll when her mother and younger sisters were evacuated to the countryside to escape the constant bombings.

At the age of 17, she was basically left alone to survive and thrive in a city torn apart by war. Christine worked in a munitions factory where perspiring hands could cost you your life.

Her stories of running from the sound of buzz bombs and spending many nights in bomb shelters only to come out to see whole blocks destroyed were both terrifying and amazing.

Nevertheless, whenever Mum talked of the war, she always said, “you just got on with your life, you had no choice.”

In 1945, Christine married Roy, a man whose complete and utter devotion to her lasted until his passing 69 years later. In 1957, the couple and their children, Alan and Pam, immigrated to Canada and settled in Ajax.

Both Mum and Dad worked hard at any job available to provide a comfortable and happy life for the family.

Christine’s first job in Canada was at the small, one storey Ajax Hospital where her workmates quickly became her friends. There was seldom a time when Mum was without employment.

One of her favourite jobs, in her middle years, was with the Oshawa YWCA, where Dad also worked.

Here she held the position of receptionist, assisting in providing a safe and secure place for women and their children in need of such an environment.

Throughout most of her adult years, Christine suffered from a variety of health problems.  Incredibly, she continued to hold a job while always keeping our home in immaculate condition.  She never stopped.  Mum was always straightforward and honest.

She rarely cried and never felt sorry for herself.  And yet, Christine had the kindest heart and knew well the feelings of sympathy, empathy and sorrow. If you needed something and she could help, she did.

She also loved a good laugh.  Her strength and determination to take on and overcome life’s challenges were unending.

The example she set alongside our dad on how to be strong, compassionate, respectful human beings will stay with us always.

As per Christine’s wishes, cremation has taken place and the family will gather to celebrate her life at a later date.

Memorial donations to the charity of your choice would be most appreciated by Christine’s family.

To share an online condolence or story please visit   armstrongfh.ca .