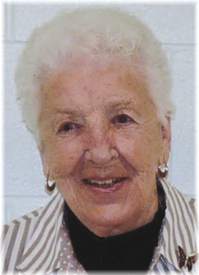 Bea Parrott passed away peacefully on May 5, 2021 at Lakeridge Health Oshawa with her daughter and her husband by her side.

Loving mother to Gail Bucking (Bernie Bucking) and predeceased by Diane (2013) and her husband Gary Gray (2017).

Bea was born in Ottawa and grew up in Arnprior, ON.

From 1943 to 1945 Bea worked at Defence Industries Limited (D.I.L) at where now Ajax is located, filling bombs and later as an inspector till the end of the war.

At D.I.L. she met her husband Bill and were married in July 1945 and lived for a short while in Brampton, ON as Bill was still in the army. Afterwards they moved to Oshawa to raise a family.

In 1959 they built their own house ‘in the country’ on Thickson Road North, just south of Taunton Road on a 2 1/4 acres property. They lived there until December 1999 and moved one more time to their last home in Whitby.

Later in retirement Bea loved to play cards at the Whitby Seniors Centre and at the 420 Wing at the Oshawa Airport.

Bea will be missed by her family, friends, and her friends at cards.

As per Bea’s wishes a cremation has taken place with a private interment at GROVESIDE CEMETERY.

Memorial donation to Saint Jude Apostolic Works would be appreciated.