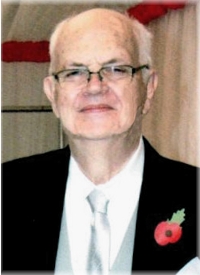 His loving family is sad to announce that Richard passed away suddenly with his wife by his side on Monday, October 4, 2021 at the age of 79.

He was predeceased by his father Dr. Richard Henry Austin Swain and mother Margaret Swain (England).

Richard was educated at the Edinburgh Academy and obtained his medical degree from the University of London. He emigrated to Canada in 1968, settling in Oshawa, Ontario where he worked for 42 years as a General Practitioner. He also served as the Medical Director of the Glazier Medical Centre for seven years.

He joined the Oshawa General Hospital Medical Staff and became President and also a member of their Board of Governors. Richard was Assistant Professor, Department of Family and Community Medicine and member of staff at Sunnybrook Hospital for two years.

He was appointed an investigative and eventually an Inquest Coroner for the Province of Ontario for 20 years. He was also Capacity Assessor for the Ministry of the Attorney General.

Richard, a humble man, will be remembered for his kindness, wisdom, integrity, sense of humour, and loyalty.

Richard touched many lives and will be fondly remembered by his family and strong network of close friends and medical colleagues.

He was a remarkable and loving husband to Sharon for 45 years. The pride and joy of his life are his daughters Sarah and Sherry Lynn who will proudly carry on his legacy. Richard wrote in a final letter to his daughters "Please don't spend too much time mourning my death. Celebrate my life."

As Richard requested, there will be no funeral.  A Celebration of Life will be planned for spring 2022 at Parkwood Estate, Oshawa, National Historic Site of Canada.

In lieu of flowers, memorial donations may be made to the Parkwood Foundation, Oshawa.

Online condolences may be left at mceachniefuneral.ca .