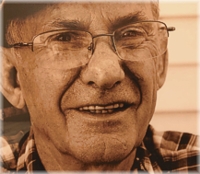 LAMERS, Ben (Bernardus) Johannes -  In his 87th year, Ben passed away peacefully Monday November 29th, 2021 at Port Perry Place, his residence for the past six and a half years.

Ben was predeceased by his loving wife Mia (Maria) with whom he shared the best moments of his life.

Ben will always be lovingly remembered by his many nieces and nephews as well as the extended family of his wife (Doleweerd).

Ben’s life story can literally be divided into four distinct periods. The first, being one of his time spent growing up in the Netherlands.

He cherished his childhood memories and was often drawn to thoughts of what life would have been like had the family not immigrated to Canada.

The second period was that of adjustment and growth.

It was during this time that he accepted the fact that he wasn’t “going home” and he was to establish a family of his own and to make the most of his drive and determination to become a skilled tradesman (bricklayer) who would, along with his brother Henk, create Lamers Brothers Construction, a successful company that built custom homes in the Durham Region.

It was also during this time that he made a name for himself as a “fantastic little soccer player”, known to many local fans and fellow players who frequented the many pitches in Oshawa at the time.

The third was his transformation into the role of being Opa. It was here where he shone the brightest.

He had no pressure to succeed, only to be his natural, caring self. He once said that if he wasn’t working building homes, he would have loved to be “part of a circus”. His ability to be a performer of sorts surely gave him the ability to become a fabulous grandparent.

A role he was extremely proud of.

The fourth and final phase would be the period of slow decline and living with Alzheimer’s. He had difficulty accepting the cards he had been dealt, but he was still able to make others laugh and smile.

Ben will surely be missed by all who loved him.

The family would like to extend a special thanks to all staff at Port Perry Place for their kind words and care for Ben.

Donations will be gratefully accepted at the Alzheimer Society of Durham Region in Ben’s name.