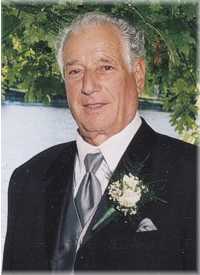 He waited patiently for the Lord to come and knock on the door of his heart, on June 7th, 2022, in his 92nd year surrounded by his family, he answered with faith and love in Jesus.

He was married to his beloved wife Carmela for over 70 years and together they would brave all of the challenges that life gave them.

He immigrated to Canada on October 15th, 1954 on the ship Roma at the age of 23, so he could provide a better life for is family.

Vittorio worked on the construction of the CN Railway, later becoming a Barber and opened Vic’s Barbershop in Oshawa.

He believed in helping many immigrants from opening his home to strangers, who would become family, to becoming a founding member of the Oshawa Italian Recreational Club and became their first President in 1966.

His vision was to celebrate their culture in the new land far from their roots.

In 1973 his entrepreneurial spirit allowed him to open a very successful Italian restaurant called “The Riviera” specializing in Italian cuisine. It became the place for new friends and family to enjoy an evening of good food and laughter.

He travelled the world meeting people from all walks of life. He valued character over pedigree and would always look for the good in people, you always knew he found it because he would open his heart to them.

Vittorio is survived by his beloved wife Carmela. Predeceased by his mother Giuseppina and father Francesco. Loving father to Americo, the late Francesco, the late Mario, Anthony and Giuseppina.

At this time, we would like to give our heartfelt gratitude to all of the doctors and medical professionals that helped with his care. Especially Dr. S. Palinka, his cardiologists Dr. R. Alessandrini, Dr. Ali Andalib.

Visitation at  ARMSTRONG FUNERAL HOME, 124 King Street East, Oshawa on Sunday June 12th from 2pm to 4pm & 6pm to 8pm.  Parish Prayers will be held at 2pm.  Funeral Mass will be held at St. Therese Catholic Church on Monday June 13th at 11am followed by entombment at Resurrection Mausoleum.

May eternal rest grant on him, O Lord,
and let perpetual light shine upon him