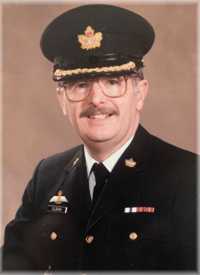 On Sunday July 3rd, 2022, Roland Edward (Ted) Gilbank passed away peacefully at the Sunnybrook Veterans Centre in Toronto at the age of 86.

Born in Oshawa, Ontario on May 3rd, 1936 to Dorothy and Norman, Ted was a loving son, husband, father, grandfather, and a loyal friend.

Known to his close friends as “Gil”, he devoted most of his life in service to the Royal Canadian Air Cadets, and was the longest serving Commanding Officer of 151 Chadburn Squadron, and retired at the rank of Lieutenant-colonel.

Ted continually inspired Cadets and Officers in Canada and around the world for over seventy years through his commitment to sharing his passion for aviation, citizenship, and leadership with young people.

Ted was an avid private pilot, world traveller, long-time engineer with PPG Canada, and happiest when sailing on a lake in his beloved Klepper kayak.

Ted is predeceased by his late wife Carolyn and brother-in-law Terry, and will be lovingly remembered by his son Brian, daughter Heidi and her husband Nathan, grandchildren Mara and Alia, sister-in-law Diane, nephew Brad and his wife Emily, nephew Mark and his wife Jen and their daughter Leila.

Ted will be greatly missed by his wife Nancy, step-daughter Sarah and grandson Brandon, step-son Scott and grandchildren Camilla and Austin, and Scott’s partner Lianne and her daughter Nicole. At this time we also fondly remember Ted’s late son-in-law Jereld and grandson Donny who passed away last year.

A graveside service for family and close friends will be held at the Orono Cemetery (End of Mill Lane in Orono, ON  L0B 1M0)  at 1:30pm on Thursday, July 7, 2022 with a following reception in Oshawa to celebrate Ted’s life.

Donations in memory of Ted’s life and service may be made directly to the Heart and Stroke Foundation, Lupus Canada, the Sunnybrook Foundation, or Southern Georgian Bay Airboat Rescue.