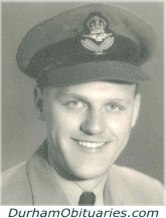 Beloved husband of the late Phyllis.

Brother of Dr. Gilbert McIlveen and sister in law, Joyce.

Don led a very accomplished life, living it to the absolute fullest over his many years. In his younger days he served our country in WWII as a RCAF Flight Lieutenant.

Upon his return after the war, Don graduated from McGill University earning a Bachelor’s Degree in Science and became a teacher at Central Collegiate Institute for many years. Don was also a Trustee with DDBE from 1982-1993 and was the Second Commanding Officer of 151 Chadburn Air Cadets.

A beloved basketball and football coach, Don was inducted into the Oshawa Sports Hall of Fame in 2001.

He was an avid Life Master bridge player and dedicated golfer until this past October. Despite all of this, he still found time for his family and his many hobbies including stained glass, fine woodworking and gardening. Don has had a profound influence on the many lives he’s touched and his legacy will always be remembered by his family, friends and all who knew him.

Many thanks to Dr. Max Leung and his assistant Diane, St. Elizabeth’s Health Care and Veterans Affairs Canada for all of their care and support.

In lieu of flowers, donations may be made to the Alzheimer Society in his late wife's memory, or to a CHARITY of your choice.

Memories and condolences can be shared online at mountlawn.ca.