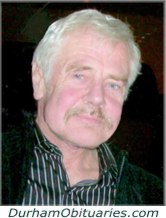 GATCHELL, Edward Howard  - It is with heavy hearts the family of Edward announces his sudden passing in the early morning on Thursday April 5th, 2018 at home.

He was proud to have celebrated his 70th birthday last September with loved ones and cold beer.

Predeceased by his parents Howard and Mabel.

Big Brother of Laurene (Terry) Shuttleworth, Gail (predeceased by Wayne) Scott and Gary (Julie) Gatchell. Eddy will be missed by his extended family and many, many friends (especially his close buddies from the Courtyard) who no doubt have many memories and secrets to keep.

A nature lover who enjoyed feeding woodland creatures, strolls by the river bank and in his early days racing snowmobiles and playing at the family cottage.

Has a collector, he has many treasures to pass on to loved ones.

Eddy was a dedicated member of the carpenters union, proudly serving for 50 years.

A stubborn but hardworking family man who could always be found in his garage tinkering away on some project with his loyal dog Ebony by his side; now they are reunited.

In memory of Edward, donations can be made to The Heart & Stroke Foundation.