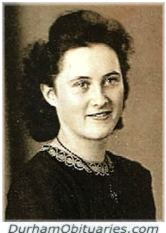 Passed away peacefully at Lakeridge Health Whitby on July 12, 2018 in her 93rd year.

Great-grandmother of 13. Stephanie will also be missed by extended relatives from Germany.

As per her own wishes, there will be no formal funeral service, cremation has taken place.

A private interment will be held at a later date.

Expressions of condolence may be place at e.touch.ca.